Leading From Inside Out - Your Authentic Brand - OD Alternatives

Leading From Inside Out – Your Authentic Brand 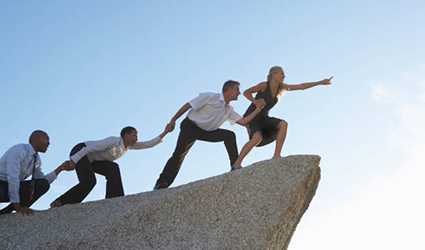 A priest was confronted by a soldier while he was walking down a road in pre-revolutionary Russia. The soldier, aiming his rifle at the priest, called out, “Who are you? Where are you going? Why are you going there?” Unfazed, the priest calmly replied, “How much do they pay you?” Somewhat surprised, the soldier responded, “Twenty-five kopecks a month.” The priest paused, and in a deeply thoughtful manner said, “I have a proposal for you. I’ll pay you fifty kopecks each month if you stop me here every day and challenge me to respond to those same three questions.”

Knowing oneself – one’s passions, one’s unique strengths, and core values is the first step towards leading a meaningful life. Authentic leadership is when you really know who you are and you constantly project who you are to the outside world. Bill George, Harvard Business School professor and former Medtronic CEO, in his book Authentic Leadership writes, “During my career, I got lots of feedback to modify my leadership style so as to fit in with the organization’s norms. Several supervisors and human resource specialists urged me to be a different kind of leader. I listened carefully to their advice but quietly rejected it. Had I followed their advice I would have become a plain vanilla manager or even been seen as a phony”.

Sateesh Warrier was a journalist who used to swing by my place, eat a meal and spend time with my family every now and then. After 15 years of working with multiple media companies he realized that he enjoyed supporting and being with like-minded people – those who enjoyed great music and homely food! Back then he also used to support and hang around with the Delhi rock band Menwhopause. He then proceeded to quit his career in journalism to start Gun Powder, a hugely popular restaurant in Hauz Khas Village, Delhi and now in Goa, a place where he surely found like-minded people. For him food was a means to build a commune.

So how do you identify your unique strengths, values and passions? Think about what do you love doing and then about what strengths or qualities come to you naturally? When you are using your natural strengths and love what you do, you are in a state of ‘Flow’ according to psychologist and Author Mihaly Csikszentmihalyi. ‘Flow’ is an effortless action that makes you feel engaged and energized. So think about moments in your life when you felt a sense of ‘Flow’, when you were totally immersed in an experience and effortlessly doing that task. What were you doing and why was that meaningful to you? What were some of the natural strengths that you were demonstrating at the time? This might help you find your natural strengths and gifts.

Ashish Arora, who was doing a sales job in Delhi was passionate about the Himalayas and he found his true strengths were his ability to connect with people, his warm hospitality (his rented two room house in Andrews Ganj always had more people than the house could afford), and his need to contribute to society. He then started Himalayan Village, Sonapani – a very successful retreat in the hills, and he now lives there with his wife and two children.

This is what I call your brand identity, your true self. If you want to build your brand, this is the foundation you must use. Remember, a brand needs to be consistent, so building a brand that is not you will become a burden, as you cannot consistently live it. Today when we talk about a ‘Modi’ brand or a ‘Rahul’ brand we are largely talking about the projected image rather than the core brand identity of individuals.

The challenge with a projected brand image that is not authentic to you is sustainability. Amitabh Bachchan got the brand of the “angry young man” with his film Deewar, and movies were made later keeping this brand in mind. There was lot of anger in the Indian youth after the Emergency and the “angry young man” brand worked well for Amitabh. Years later, when he was neither young nor angry, his movies were unable to draw the kind of fanatical crowds that associated themselves with his projected brand. Your brand identity and brand projection need to be aligned and that is the power of an authentic and sustainable personal brand.

Sometimes leadership crucible experiences help us to clarify and focus on our authentic selves. There are moments in life that define us. Most of us have experienced them – moments that made a huge impact and created a shift in our thinking and being. This catalyst for positive change and evolution could be a painful and challenging experience. It is called a ‘crucible experience’ named after the vessels medieval alchemists used while attempting to turn base metals into gold.”If I had not been in prison, I would not have been able to achieve the most difficult task in my life – changing oneself,” Nelson Mandela, the iconic South African apartheid leader, who spent over a quarter a century in prison, is reported to have said.

Raageshwari Loomba, well-known singer-actress was diagnosed with Bell’s Palsy, a nervous disorder that leads to paralysis of the facial muscles. As medicines could not help her, Raageshwari began a long journey of positivity and healing. Through facial yoga and Iyengar yoga, she restored strength to her facial muscles without reconstructive surgery. “There was a huge growth that happened while I was ill. Today I’m at a position where I know what I want, and that only happened because there was this huge step of falling ill and having that time to rediscover myself. I got introduced to yoga and meditation, and that kind of holistic healing started to take over my life. If you really, really believe in something, it will come true,” she says. Today she teaches yoga and runs workshops on personal transformation. Raageshwari also produced a music CD, Positive affirmations by Luise Hay who wrote the famous book How to Heal Your Body.

“I shall no longer be instructed by the Yoga Veda or the Atharva Veda, or the ascetics, or any other doctrine whatsoever. I shall learn from myself, be a pupil of myself; I shall get to know myself, the mystery of Siddhartha.” He looked around as if he were seeing the world for the first time,” wrote Hermann Hesse in his book Siddhartha. Understanding the self in its simplicity and complexity and leading from inside out is mindfulness.