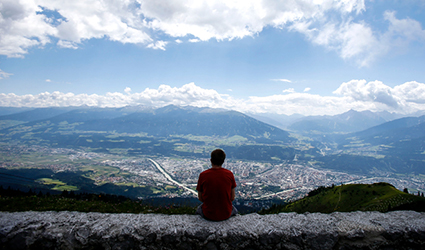 Joshua Bell, one of the finest classical musicians in the world, stood during the morning rush hours at a metro station in Washington DC, playing some of the most elegant music ever written on one of the most valuable violins ever made. He placed the open case of his violin at his feet, with few dollars already in it, like any other street musician would do, and waited for the passengers to recognise his talent. Around thousand people passed in front of him and how much money do you think he collected?

Three days before he appeared at the Metro station, Bell had filled the house at Boston’s stately Symphony Hall, and each seat went for 100 dollars! He collected a total of $32. When he finished playing and silence took over, no one noticed it. No one applauded and no one recognised. No one knew the violinist was Joshua Bell, and he is playing one of the most intricate pieces ever written with a violin worth 3.5 million dollars. No one expected Joshua Bell to be performing in a metro like a street musician to earn money. They did not believe that the man performing in the station is someone very popular. We all behave in congruence with our beliefs.

In the last article I mentioned about deep listening as a tool for personal mastery and now let’s examine our mental models, assumptions and believes. Consider the keyboard of your computer. Why are the alphabets in that order? Usually when I ask this question to an audience, I get the answer that the arrangement of alphabets in QWERTY is to increase typing speed. That is what my teacher also told me when I went to learn typing in the summer vacation after my class ten examination. The computer keyboard is directly derived from the old typewriter keyboard. As the original typewriters were slower and the keys would get jammed if you typed faster, the keys were arranged to slow the typist down. Hence the common letters, a, s and e are used by the third and fourth finger of the left hand. As millions of people believed that the current arrangements of alphabets increased typing speed and trained themselves in using it, changing this belief and habit became a challenge.

Our mental models are our attitudes, beliefs, opinions, what we hold as truth, perceptions, assumptions, understandings, points of view or our frames of reference. When I came to Delhi, in 1994, what helped me to get a rented house was my South Indian identity. Most of the advertisements that I saw had mentioned that they preferred South Indian’s as tenants. Months after shifting into the Noida house, I asked the owner of the house why he preferred South Indians as his tenants and he said he believed that we will not create much trouble to him. So his mental model and belief was influencing his decisions in this case. Though he possibly changed that belief soon as my roommates and I during our bachelor times gave him enough sleepless nights as late night parties and loud music made the apartment notorious. The house owner with his family was staying upstairs in the two-storey house.

Mental models can be simple generalisations, such as “people are untrustworthy,” or they can be complex theories. I knew a retired naval officer who told me that people always cheat him and he does not know how to operate in the civilian world. Each time I met him I asked him if anyone cheated him in the recent past and he always had stories about the electrician fitting sub standard gadgets to the white wash guy disappearing with advance money. It is interesting to note how mental models shape how we act. If we believe people are untrustworthy, we act differently from the way we would if we believed they were trustworthy. What Henry Ford said is very powerful. “Whether you believe you can, or believe you can’t, you’re right”.

The problem is not really whether mental models are right or wrong, because by definition, all models are simplifications. Remember the map is not the territory and the menu is not the food. Mental Models and beliefs are created by your conscious mind based on your thoughts and experiences. The danger of our mental models is that we never question them; and sometimes we are even unaware that we have them. Because we remain unaware of our mental models, our models remain unexamined, and because they are unexamined, the models remain unchanged. So the question is not whether the mental models are right or wrong, the question is whether they, and the actions they generate, are effective in getting the results we want.

My invitation to you is to observe, pay attention and examine your mental models. Be aware of your beliefs and how they are influenced by your past experiences and the meaning you gave to those experiences. We cannot change our behavior effectively without changing the beliefs and assumptions supporting that behavior. So according to you what is a metaphor for life? If you say life is like a game of chess, that mental model is going to influence your life. While on Facebook you might write that you are feeling blessed and life is a celebration, what do you really think life is? Happy observing and examining your beliefs and if you think your current mental model about a specific situation is limiting you, you have the power to change it.