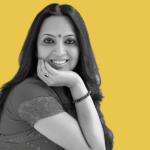 In 2014, I was launching a forum on gender sensitization with a shoe-string budget, it was a passion project, where I intended to share the stories of several women leaders, on   how   they   overcame   stereotypes   and   achieved   leadership success.

Although I had partnered with leading associations like Tie Stree shakti and NHRD (womentoring wing), I was struggling with sponsorship. It was then I approached a Padmashree award winning theatre veteran to be a part of this project and he graciously agreed, even with budget constraints. Now that I had a known name associated with the project, I thought that I would be able to garner some sponsorship. However, as luck would have it, I received a very small amount as sponsorship.

Although I was able to cover event spends, there wasn’t much money left for publicity and PR . That’s when I approached an old PR firm I had worked with, and told the founder candidly that I had very little budget, but the project was driven by earnest passion. Something must have struck a chord, and she agreed to sign up. The forum received heartfelt appreciation, but the credit of the success in my opinion can be ascribed to the power of allyship.

There were two strong allies here:

The celebrity who agreed to be associated with the project and supported the project through out and the PR agency that signed up within the limited budget and pushed the envelope to make the event a success.

This sprouts up the question, what exactly is allyship and why is it important in advancing women leadership.

Allyship is a practice where individuals become collaborators supporting an individual’s growth or success in any walk of life. The term allyship is explained as the practice of emphasizing justice, inclusion, and human rights by members of an ingroup, to advance the interests of an oppressed or marginalized outgroup. At the workplace, allyship can also become a strategic tool, whereby an ally can collaborate to promote equity through supportive public actions of sponsorship and advocacy. Allyship can help drive systemic improvements to workplace practices, processes and culture.

The research included a total of 102 participants i.e. 81 female leaders & 21 male leaders that came from a variety of industries & ethnic backgrounds and represented several fields of the industry.

Some of the challenges that they perceived were:

Lack of role modeling & mentoring: Not too many women leaders are there who can show the way to others looking for guidance.

Cultural challenges: Women leaders expected to live up to too many expectations.

As male leaders accept and advocate the need of advancing women leadership, through mentorship and allyship, it is important to understand that allyship is beyond the construct of gender. How can one then become a powerful ally at the workplace, here are a few suggestions:

Allyship   can   help build   a   strong   inclusive   culture. Mentoring and allyship initiatives can significantly improve performance and help women break the glass ceiling. Let us thus remove the ‘darr’ from gender and move beyond social constructs of gender. As allies in any walk of life, we can make our own unique contribution in building a more balanced word!

Mishti Verma is a partner at OD Alternatives, a boutique consulting organization. She has close to two decades of experience in building strategic alliances, IP development, facilitation & coaching. She is also a Gallup certified strengths coach. She has worked extensively in areas of gender sensitization, D E I, leadership development and behavioral training. Her work has been recognized by Times of India, IDIVA, Hindustan Times, BIG FM, Radio One, Cake & Whiskey-New York, Cometsa Radio Worldwide-South Africa et al.