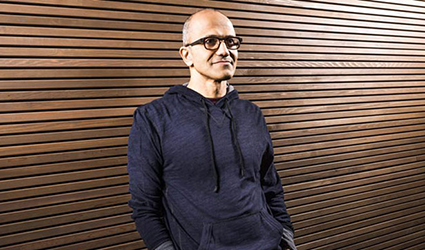 Practice can never be overemphasized. Talent, of course, triggers it all, but it needn’t be the only source of the proverbial guiding light. But then, to paraphrase Sri Aurobindo, none of that hard work will amount to anything unless you have realised perfection in yourself.

But is an individual possessed of a dream-with-a-deadline enough to move mountains? Sorry, the answer seems to be ‘No’, especially when you contrast the cases of two top-of-the-line professionals: One, Satya Nadella, the pride of India, Microsoft’s Hyderabad-born global CEO . The other, Sarita Devi, who built her stamina by collecting firewood in Imphal, and went on to shine India’s name as a professional boxer in international arenas.

Nadella was in India addressing students on September 30 and he told them that they have to fall in love with what they do because everything else then becomes so easy. On the same day, Sarita, who was denied a silver medal in Incheon Asiad thanks to poor refereeing, stood sobbing on live TV, her agony topped up by the insult generously thrown her way by India’s boxing federation that refused to help her lodge an official complaint. In the end, she had to borrow $500 to do it herself.

Sarita and Satya, along with their similar sounding names, also share the love for what they do and the competitive spirit to do better in what they love doing. Satya could find his gold in America and Sarita had to borrow $500 in South Korea to fight for her silver. I am not an expert in boxing and I am not sure if the judges were right or wrong. But if we send our sportspersons to international competitions with an intention of them winning not just participating, then we should be doing a better job to support them.

And when I talk about a better job at supporting them, I think I know what I am talking about. Coincidentally, the same day I was witness to the reception being thrown to Indian cricketers playing the Champions League T20 at a Chandigarh Hotel where I happened to be staying. A bunch of youngsters being showered with all that you can dream for contrasted sharply with an Indian athlete breaking down on live TV in a foreign land.

We are the 10th largest economy and the biggest democracy. We say we want to be a superpower. We might also want to prove that we are a country that nurtures our sports talent, not just cricketers and this should start with having an aspiration of where we want to be in terms of winning medals in international competitions that we participate in.

Talent management and talent development are terms that are commonly used in the boardroom and Nadella’s successful journey as a CEO could be also the result of the talent management and talent development initiatives Microsoft does successfully. Identifying and nurturing talent is the first step of creating high-performing individuals in a particular field.

In 1985, Dr. Benjamin Bloom, the educational psychologist who made contributions to the concept of mastery learning, conducted a study to understand how world-class talent is developed. They interviewed 120 people who had achieved world-class success in such diverse fields as art, athletics, music, and academics. Among those interviewed were concert pianists, sculptors, tennis champions, Olympic swimmers, research neurologists, and mathematicians. He indicated that despite the initial characteristics and gifts of the individual, unless there is a long and intensive process of encouragement, nurturance, education and training, the individual would not attain extreme level of capability in a particular field. While we possibly do this in the field of cricket, we do not have a robust mechanism of identifying, nurturing and developing talent when it comes to other sports.

Anders Ericsson is a Swedish psychologist who studies the cognitive structure of expert performance in domains such as medicine, music, chess, and sports, investigating how expert performers acquire their superior performance through extended deliberate practice (e.g., high concentration practice beyond one’s comfort zone). When Malcolm Gladwell wrote about 10,000 hours of practice is the success to greatness in a specific field, he was basing his argument on Anders Ericsson’s research.

This deliberate practice and nurturing is something that a doctor, an engineer and management graduate who is working in a corporate office get in India but many sports people find this difficult as support mechanisms to identify and nurture talent is lacking. Most organizations use the “nine box grid” to identify their high potential employees. It is a matrix tool that is used to evaluate and plot a company’s talent pool, based on two factors, performance and potential.

Typically, on the horizontal axis is “performance” – measured by performance reviews and it measures the ability of an employee to perform in his or her current role. On the vertical axis is typically “potential” – referring to an individual’s potential to grow one or more levels. Employees who are high performers and high potential are then given challenging opportunities that would give them deliberate practice of their strengths outside of their comfort zone and nurtured and rewarded in a scientific and systematic way.

In an Indian situation, most parents would want their children to become cricketers and society would nurture and reward cricket thus helping cricket players to have deliberate practice and expertise. Most successful Indian CEOs globally have built their career aboard after leaving India. While we have contributed significant number of global CEOs, may be more than China, their success cannot be attributed to the nurturing of talent India provided. Had Nadella stayed in India, his chance of becoming the global CEO of Microsoft would have been less.

The positive impact of a nurturing environment and its impact in producing high quality talent can be seen if you look at the women CEOs in India’s financial services sector. ICICI Bank has produced seven of India’s 14 top female financial professionals. This means despite the government and the larger environment in the country, pockets of excellence could flourish if we create the right nurturing and developing climate.

So Indian sports organizations need to articulate their vision and goals and create a platform to identify and nurture talent. Considering India’s economy, the government alone might not be able to invest in the resources required for us to win medals and private organizations can play a supportive role here. If we can spend so much money in the name of cricket, I am sure, if there is a will, there will be a way.