Travis – Prophet or a Pusher? 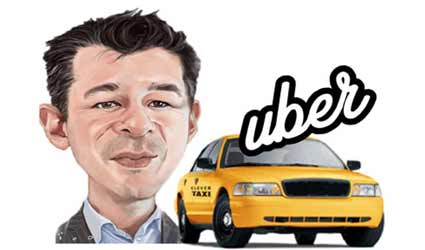 MARTIN Scorcese’s cult hit of the 1970s had Robert de Nero playing the intense, brooding, and lonesome Travis who had a problem with the way the world – at least New York City – was. And he set about to change it in ways that are not generally recommended for common folk.

Travis Kalanick was born the year Taxi Driver was released in the US – almost exactly six months apart. Quite a coincidence then that our Travis too took to the world of taxis. By the time he turned 40, Travis K had redefined the world of taxi drivers and customers. Now the word on the mean street is that he brought about that change in ways that are not generally recommended for common folk.

Say what you want. But Travis K, who as the CEO of Uber propagated a new kind of Capitalism, will always be an iconic name in business. However, he now stands blamed for all the ills plaguing Uber.

Though we talk about the importance of top teams, the truth is, in most organistions the CEO is singled out for ultimate responsibility for everything that goes on. Loneliness must have followed Travis K everywhere. So much so, that he once took out his laptop to work while inside a strip club.

Travis K resigned as the CEO of Uber on June 20, 2017. “I must fundamentally change as a leader and grow up,” the then Uber CEO wrote in a note to Uber employees in February 2017. “This is the first time I’ve been willing to admit that I need leadership help and I intend to get it.” as told by him when a video appeared in public that showed him arguing with an Uber driver and losing his temper.

Both the Travis’s wanted to clean up the system and one used disurption as a model and spoke about his “principled confrontation”. Travis K had Fountain Head, the famous book by Ayan Rand, as his twiter avatar for sometime and the The Fountainhead’s hero is a principled rebel who refuses to back down from his beliefs, even if it means violating society’s rules and norms.

In the movie Taxi Driver, the elder and wiser driver, Wizard tells Travis Bickle “Look at it this way. A man takes a job, you know? And that job – I mean, like that – that becomes what he is. You know, like – You do a thing and that’s what you are. Like I’ve been a cabbie for thirteen years. Ten years at night. I still don’t own my own cab. You know why? Because I don’t want to. That must be what I want. To be on the night shift drivin’ somebody else’s cab. You understand? I mean, you become – You get a job, you become the job?”

You get a job and you become that job. Travis K had a job of expanding Uber to all parts of the world, making Uber a monopoly when it comes to hiring a taxi. He saw potential in Uber for a smooth-functioning instant-gratification economy, powered by the smartphone as the remote control for life. “If we can get you a car in five minutes, we can get you anything in five minutes,” he said.

Howard Roark, the hero of the Fountain head said “I have, let’s say, sixty years to live. Most of that time will be spent working. I’ve chosen the work I want to do. If I find no joy in it, then I’m only condemning myself to sixty years of torture. And I can find the joy only if I do my work in the best way possible to me. But the best is a matter of standards—and I set my own standards. I inherit nothing. I stand at the end of no tradition. I may, perhaps, stand at the beginning of one.”

Yes, and sometimes at the begining of none!

Travis K and Uber leadership team were clear about their goals and strategy, but failed in creating a positive work culture. Their methodologies and strategies to win at any cost attracted cristisms from all directions. While on one side, their sharing model was to help all stakeholders and make life easy, but the lived experience of people in Uber, the taxi drivers, government authorities and competitors tell a different story of power-hungry organization that did not bother about any ethics or values.

This is the dichotomy we see and experience. Travis K changing his twitter avatar from Fountain Head to Alexander Hamilton, which he did for a while some years ago, may be just one sign of this polarity that exists in human beings.

Betsy, the girl who Travis B likes in the movie Taxi Driver, says that he reminded her of the song Pilgrim by Kris Kristofferson and also expresses the dichotomy of seeing him as a Prophet and a Pusher!

“He’s a poet, oh, he’s a picker, he’s a prophet, he’s a pusher, He’s a pilgrim and a preacher, and a problem when he’s stoned, He’s a walkin’ contradiction, partly truth, partly fiction, Takin’ ev’ry wrong direction on his lonely way back home”

So Travis Kalanick, a Prophet or a Pusher? … is the question that lingers in the minds of many, as the curtain falls down on his role as a CEO in Uber. In the movie, Travis B – accidentally though – emerges as the “Taxi Driver Hero”. What fate awaits Travis B remains to be seen.